Every Monday afternoon, in a gray-walled conference room down the hall from The Beacon Day Center, three of our volunteers lead a group of homeless men and women in a writing workshop.

Generally, the workshop starts with a quick review of work completed from the previous session, and then everyone spends 45 minutes writing – anything from poems to essays to novels.

Just being present in the room during writing time is inspirational: heads bowed in firm concentration, the whisper of pencils and pens on lined notebook paper unceasing. Many people say they want to write; few have this kind of discipline. 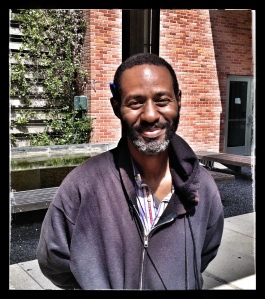 One of our writers, Michael Crawl, writes deeply inspiring poetry. Most often, he has a pen tucked behind his ear to capture those spontaneous verses that come to mind for a fleeting moment– the same verses that eventually give birth to entire poems.

When I asked Michael if I could publish his work on our blog, he questioned whether it was  good enough – whether it mattered enough for people to read. Many creative types battle self-doubt, but I wonder if it’s especially difficult for Michael to see himself as a poet or an artist. I imagine that facing homelessness, and being labeled as homeless, is such a heavy burden that it has the capacity to eclipse all other sense of self. 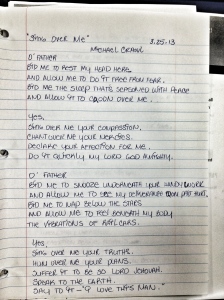 In two weeks, Michael, along with the other BEACON writers, will celebrate the final workshop session of the spring. They’ll each receive a printed anthology of their work, and have the chance to read their favorite selections for BEACON staff and friends.

But, I hope the end-of-workshop celebration is more than that. I hope it’s a reminder to Michael and his classmates that no matter where they sleep, they are writers and artists and poets, and most importantly, children of God. I hope Michael comes to know that his work does matter enough to be read. And I hope his words remind us that homeless doesn’t define a soul.

4 thoughts on “Sing Over Me”